Sicilian Cucuzza: one name, many stories and many tasty recipes

Sicily is a land of flavors, myths, legends and stories, of folk beliefs and sayings that tell an anecdote or reveal the intrinsic character of its inhabitants. From this millenary culture come sweets and first courses, fragrances and flavors that still remain known and hidden treasures, testimony to the worlds and thousand faces of Sicily.

Fruits and vegetables become protagonists of other stories, handed down through the centuries, and above all they become precious ingredients for a multifaceted traditional Sicilian cuisine, which transforms and creates unexpected magic. The cucuzza, known in Sicily as “cucuzza longa” (long zucchini) or “snake of Sicily” (Lagenaria longissima), becomes the spokesperson for many stories but also for many different flavors: from a vegetable consumed salted for pasta with “tenerumi or talli” it even transforms into a raw jam, cucuzzata.

A triumph of flavors that we want to tell you about today to delight you and introduce you too to the many facets of Sicilian cuisine. Through its recipes and the stories it brings, let’s find out everything you need to know about Sicilian cucuzza!

Known among Sicilians by the name “Cucuzza longa“, the Zucchina serpente di Sicilia (or Lagenaria longissima), but also “trumpet zucchini“, is a strange cucurbit produced by the bountiful land of Trinacria. Its cultivation starts from the end of April, and in no time its foliage with a climbing habit reaches a remarkable size.

These particular zucchini reach sizes of more than a meter by taking on curves that give them shapes on the ground similar to those of moving snakes, hence the characteristic name. It differs from other zucchini in that in pergola cultivation they hang downward, while in soil cultivation they take on the shape of a small snake. Cucuzza longa is narrow and long, with lengths that can reach a meter.

Zucchini leaves are not thrown away. They are, in fact, one of the main ingredients of one of the tastiest dishes of the summer-autumn season: pasta with tenderloins. The long zucchini lends itself to the preparation of soups with a sweet but very tasty aftertaste.

A dish that is habitually found on the tables of the people of Palermo and can be considered a single dish to be enjoyed warm or cold, to which caciocavallo or other types of cheese are used to give it even more flavor.

As we have said, cucuzza in Sicilian dialect means pumpkin or long zucchini. The etymology of the word is clear, this word comes directly from the Latin cucutia (gourd), which in turn comes from the Greek word kùkuon.

But here is one of the Sicilian idioms that never goes out of fashion, still used today in common speech and in any context, by young and old alike.

When someone exclaims “testa ca ‘un parra si chiama cucuzza!” he is simply noting his interlocutor’s lack of ability to express opinions.

Precisely, when someone avoids communicating the feeling he or she is feeling, an uneasiness or a personal thought despite the fact that this could be to his or her advantage, then he or she is singled out as a “cucuzza head“, that is, an empty head, unable to express his or her ideas or emotions to improve his or her condition.

Alternatively, we also have another Sicilian Saying where the Cucuzza is mentioned, check this out!

It was from cucuzza that one of the traditional Sicilian dishes was born: cucuzzata, which is not to be confused with zuccata probably of Arab origin. The history of cucuzzata has to do with Scotland. No, “cucuzze longhe” are not produced in Scotland, but the original zucchini-based jam that was prepared in monasteries was transformed, putting precisely the long zucchini as the main ingredient.

A modified recipe, which originated from the small tart called Maria Stuarda spread in the 19th century in western Sicily. Initially made in convents, it came from England, imported by the natives on the basis of an original Scottish dessert to which, of course, some modifications were made.

Originally, the name of the cake was Queen Mary’s Tart in homage to Scotland’s Queen Mary Stuart, whose story is woven into the history of England at the time that opposed Elizabeth I as heir to Henry VIII’s rightful crown, culminating in her losing her head in the hangman’s basket.

As with other imported customs or ingredients that were naturalized and later entered regional cookbooks, the Mary Stuart because of its simplicity of workmanship and durability without the need for refrigeration, but also its graceful aesthetics, became part of the packaged sweets in initially upper-middle-class homes and later in confectioners’ shops, as well as in homes at festive occasions.

The basic ingredient is a short pastry, in Sicily made with lard and not butter that would be used much later, and long zucchini jam unknown in the rest of Italy and for some possible to substitute with the variant of the centenarian zucchini, which makes these pastries a truly unique and, above all, original dessert.

Later a completion took place that gave more aesthetic effect and an even more fun and elegant appearance with the affixing of the famous shiny red candied cherry, which in this case did not end up on a cake, but making a hat on a cupcake.

In the late 1990s it was still well present in store windows regularly ending up inside Palermo trays also known as “n’guantiere” unfailingly for commanded parties, buffets or tea cakes. 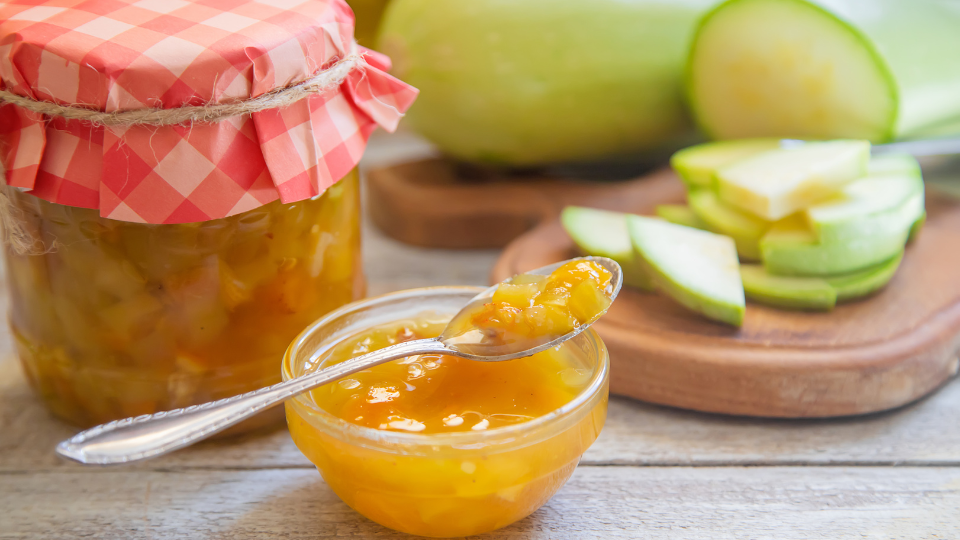 Sicilian recipes based on cucuzza or long zucchini

Soups to be enjoyed hot, lukewarm or cold, pasta dishes garnished with tomatoes, potatoes and onions, but also unique dishes that release inviting aromas and amaze with their intense and genuine flavor.

Cucuzza is the undisputed protagonist of two of the most famous and good dishes of Sicilian cuisine: pasta with tenerumi and fried zucchini. Let’s discover them together!

Pasta coi tenerumi is a traditional Sicilian dish. If you asked for “pasta coi tenerumi” in Rome, they would look at you askance. Pasta with tenerumi is a true specialty of Sicilian cuisine. As simple to prepare as it is tasty, this dish is somewhere between a soup and a pasta dish. The absolute stars of this dish? The sweet Sicilian long zucchini, cucuzza, and its tender leaves.

The tenerumi, or tenerume, are precisely the leaves of cucuzza, the zucchini that grows on the island and is also known as “snake zucchini.” These are broad leaves that are dark in color and velvety to the touch, and are harvested when they are tender along with their flowers.

We can say that pasta with tenderloins is somewhere between a first course and a soup. Traditionally, it is prepared with spaghetti broken up by hand to give the pasta an irregular size and give the dish a more familiar, homemade taste.

The spaghetti is cooked in the same water as the vegetables and then seasoned, without draining, with “picchi pacchi,” a thick tomato sauce made with plenty of oil and garlic.

Fried zucchini: with or without pasta!

Here is a mouthwatering, easy-to-prepare dish that is a real must for any self-respecting Sicilian: fried cucuzza or fried zucchini. Despite its humble origins, this traditional dish has won a place among the tastiest traditional dishes and is also prepared for the holidays, with or without pasta.

In western Sicily, pasta with fried zucchini is prepared, which, in its simplicity, is a delicious and very tasty one-pot dish.

To prepare it, you only need long zucchini, which in Sicily are mainly used for frying. Just cut the cucuzza into rounds and then fry them in olive oil. Spaghetti is used for the pasta, but other pasta shapes can also be used. The important thing is to cook the pasta in the same oil where you fried the long zucchini and then add the freshly fried zucchini.

Served hot, pasta with fried zucchini will leave everyone full and happy!

Ready to enjoy cucuzza and experiment in the kitchen with this delicious ingredient with a Sicilian heart? Share your experience with us and let us know if you have already prepared a dish with Sicilian cucuzza or if you have other recipes to recommend!

Copyright 2021 SicilianFoodCulture.Com . All rights reserved. Link to Privacy Policy. We are a participant in the Amazon Services LLC Associates Program and other affiliate advertising programs designed to provide a means for us to earn fees by linking to Amazon.com and affiliated sites. Content is also monetized by Skimlinks.