Our History: the Sicilian Flag 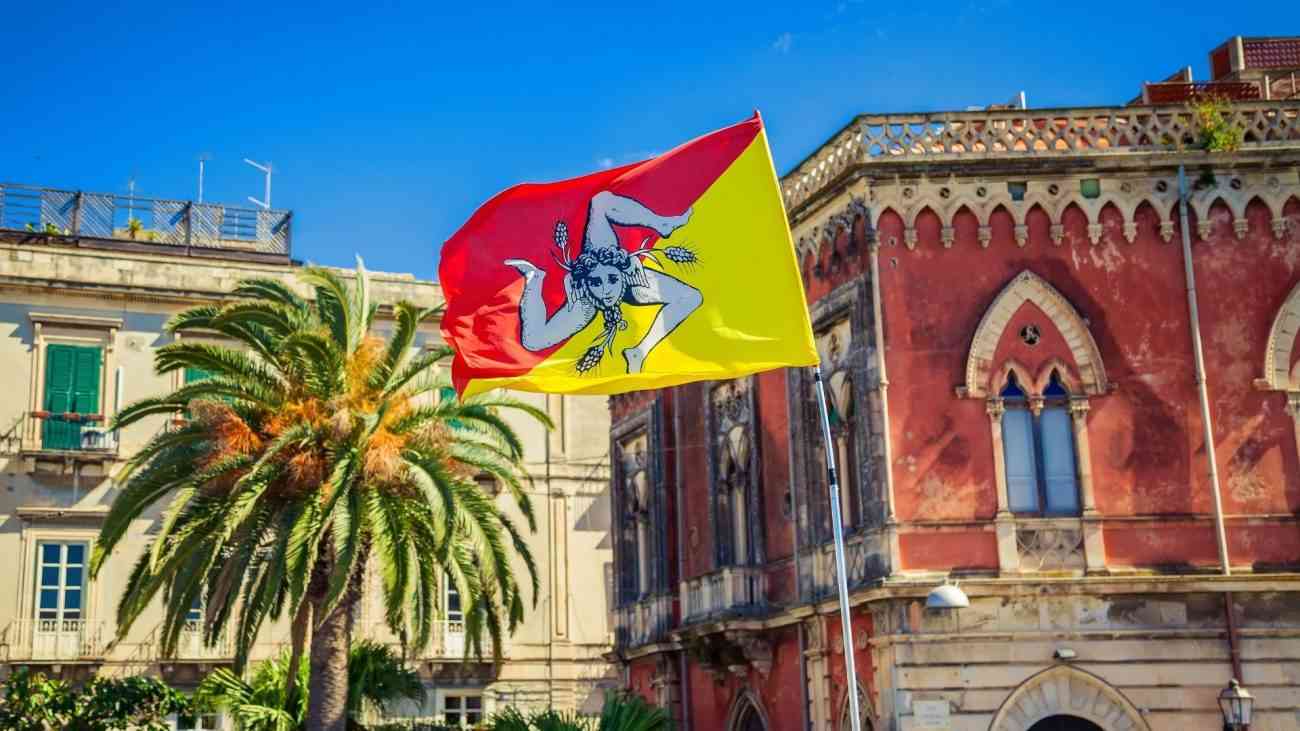 Every Sicilian in the world recognizes this flag – it is the Sicilian flag and brings to us a lot of memories and feelings.

Maybe you recognize the flag too, but most of the Sicilians don’t know its history and meaning – What is the name of the head with three legs? Why is it red and yellow? How old is this flag?

The origin of this flag dates back to 1282, during the “Sicilian Vesper“, the rebellion of Sicilians against Angevins; having a flag was very important because it represented the Sicilian people against the stranger ruler. The colours of the flag, red and yellow, are the colours of Palermo and Corleone (also famous because of the movie “the godfather“), first two cities in which revolt started.

The symbol in the middle of this new flag,  the “Triscele“, is composed of the head of Medusa with three ears of corn, surrounded by three legs; Medusa’s head was introduced in Sicily by Greeks during their domination (VIII-III century b.C.), used as a talisman and decoration for jewels and everyday objects, while the ears of corn represent the fertility of Sicily; during the Roman period the island was considered the “Empire’s Barn“.

The three legs, another greek symbol, are the three corners of Sicily: cape Peloro (near Messina), cape Passero (near Siracusa) and cape Lilibeo (near Marsala). Notice that you can often find the term “Triscele” used as synonymous of “Trinacria“, an ancient word used for Sicily!

This flag has been used during the revolutions of 1848 and the Italian Risorgimento, but it became the official one only on 4 January 2000, 718 years after its creation. Nowadays you can find it in every public building in Sicily, and of course in every part of the world, since Sicilians are everywhere and they love to show their origins!

Have you ever been to a Sicilian restaurant trying these amazing dishes? We are sure you would find one of our flags!!

And what about you? Do you have the Sicilian Flag at home?

Thanks for the info ?

Agreed. When I was there four years ago, the only city that leveraged off The Godfather was Taormina, the tourist Mecca. The rest of us do not aggrandize the mafia anymore than a body would celebrate a cancer.

Sorry can someone show me the ears of corn, I only see the the snakes

I fly it proudly beneath my American flag

[…] And what about the story of the Sicilian flag? Do you know what’s the meaning behind that? If not, click here and check our article! […]

[…] Who does not love chocolate? Well, Sicilians love it a lot, and in a small town called Modica chocolate is made in a unique way that makes it […]

[…] You can read more about the Trinacria and the Sicilian Flag here. […]

That can’t be corn, because corn wasn’t brought from the new world until 1492. It’s wheat. Sicily was the bread basket of the Roman empire

Even though I’ve seen this flag hundreds of times I actually had to take a second look to see if it was in fact corn. I’m thinking to myself there’s no way that’s corn.

Those are grains of wheat

In Greek mythology, Medusa had snakes in her hair. Looking at the picture of the flag I see what looks like 3 sprigs of wheat coming from the head and ‘hanging’ between the legs. Corn is indigenous to the Americas and would not have been known in Roman times nor in 1282.

Copyright 2021 SicilianFoodCulture.Com . All rights reserved. Link to Privacy Policy. We are a participant in the Amazon Services LLC Associates Program and other affiliate advertising programs designed to provide a means for us to earn fees by linking to Amazon.com and affiliated sites. Content is also monetized by Skimlinks.